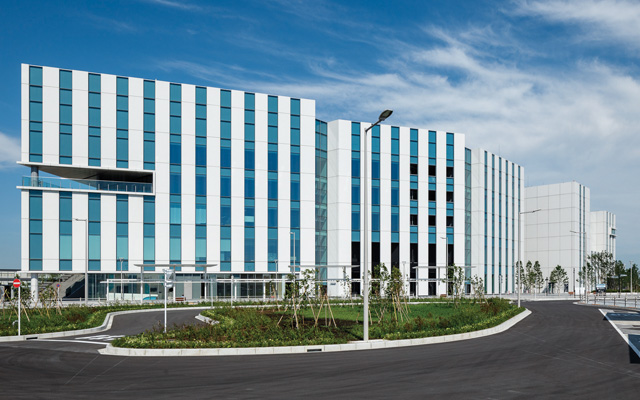 Located in the Boracay Newcoast township that is fast taking shape, the modern convention centre has capacity for 800 pax banquet style or 1,200 pax theatre style.

Its outdoor venue, The Gazebo, has space for up to 200 guests.

The convention centre is next to Belmont and Savoy hotels, which have 1,000 keys combined, with a third hotel, Chancellor, being developed all under the same owner, Megaworld Hotels and Resorts.

The entire venue has LED walls and can be divided into three function rooms, with a modern set up and fixtures for virtual and hybrid meeting facilities equipped with Wi-Fi.

Boracay Newcoast Convention Center’s selling point is its location, making the venue and surroundings a business events destination in itself, with a vantage view of the ocean and the iconic Boracay keyhole.

It is also within walking distance to the beach, just 50m away.

The conference centre has rooms suitable for both large and small meetings, as well as accommodation for visitors attending multi-day events. There is also a multipurpose hall for 3,000 pax, standing. As the facility’s main goal is to bring together advanced technology and culture to facilitate social innovation and present old and new Japan, the space also offers cultural experiences, entertainment and a rooftop plaza with foot baths overlooking the nearby runways.

Conceived as a smart city project driven by the government, IICC will have five large exhibition halls, a multi-purpose convention centre, the largest auditorium in India capable of holding 10,000 people at one time, as well as multi-arena facilities for 6,000 people.

The first phase of IICC is expected to open in 2022, and will comprise Halls 1 and 2 as well as an 11,000-seat convention centre. Between the exhibition and convention facilities, an artistic one-kilometre-long lobby will capture various attractions, shopping and entertainment, as well as a 3,500-key hotel, office space and meeting facilities.

Phase two is expected to be completed by December 2024.

IICC is expected to infuse a demand for more than 100 major international and local exhibitions annually.

Capacity has been boosted five times over to 300,000m2, allowing the centre to accommodate 100,000 visitors per day and several meetings and events concurrently. Of the total space, 78,500m2 has been dedicated to event usage, while 10,000m2 has been earmarked for retail space.

The versatile venue will reopen in time for the Asia-Pacific Economic Cooperation (APEC) Summit 2022 this September. Located in the heart of Kota Kinabalu city, SICC offers 38 event spaces of various sizes across five levels. These are suitable for any event arrangement, and the venue can accommodate up to 7,542 people altogether.

For planners desiring an outdoor venue, SICC has a 7,000m2 plaza connected to the main lobby, set against a backdrop of islands and the South China Sea.

Tākina, New Zealand
Tãkina is a new convention and exhibition centre that is set to open in Wellington, New Zealand come 2023. Located within the CBD, the purpose-built venue will offer a multitude of flexible spaces that come with fully integrated audio-visual and Information and Communications Technology systems to facilitate hybrid conferences.

Tãkina boasts two divisible plenary halls located on separate levels, allowing for two conferences of up to 700 pax to function concurrently. Alternatively, the entire hall can accommodate up to 1,600 attendees at once.

There are also up to 2,500m2 of exhibition and catering space, plus 11 breakout rooms.

Delegates attending events at Tãkina will benefit from easy access to Wellington’s myriad accommodation, recreation and lifestyle offerings – many of which are within walking distance, thanks to the compactness of the central city.