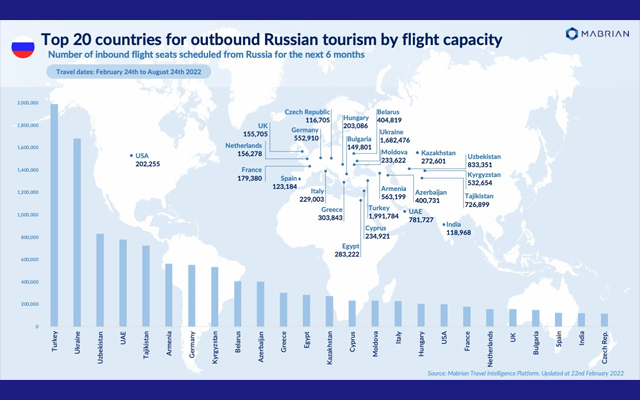 Russia’s shocking invasion of Ukraine puts to test the resilience of its outbound travellers who are prized for their long average length of stay and determination to travel come what may.

That resoluteness may end. Even before the crisis, the devaluation of the Russian rouble has crimped the spending power of Russian travellers. Now, following severe sanctions on Russia by the US and Western allies, the rouble has plunged by 30 per cent against the dollar.

Sanctions imposed to-date, particularly the removal of Russia’s central bank and some Russian banks from the SWIFT global payments system, are meant to disrupt payments for Russia’s energy and other exports, and cripple the economy. According to a BBC report, Russians are already waiting in long lines, worried their bank cards may stop working or that limits will be placed on the amount of cash they can withdraw.

Travel may be the last thing on their minds.

In 2019, Russians made 20 million trips abroad and continued globetrotting even during the height of the pandemic, as shown In 2020 when 12 million Russians travelled abroad, according to Sri Lanka Tourism. The country lifted international travel restrictions last October and saw Russia rise to become its top market.

But Sri Lanka and other popular Russian haunts in Asia, such as Thailand, are already seeing cancellations or a softening of the market.

Michal Zitek, area general manager of Angsana Laguna Phuket, said: “Our hotels in Laguna Phuket, Maldives and Corfu (an island in Greece) have not reported significant cancellations, however the pick-up pace may dwindle slightly.”

The market had seemed more “reserved” due to the currency devaluation, said Zitek.

Softer blow on Asia
Asia is expected to be less impacted than Europe, if only because its share of the Russian market is smaller. Data from Mabrian Technologies, a Barcelona-based tourism intelligence platform, shows that the countries with the most number of scheduled flights and seats from Russia in the next six months are Turkey, the UAE, Germany, Greece, Egypt, Cyprus and Italy, among others.

These countries would see their tourism sector affected if the crisis lengthens, said Mabrian.

“A new instability puts Europe’s tourism recovery at risk when it seemed that we had overcome the crisis caused by Covid-19,” said Carlos Cendra, Mabrian’s director of sales and marketing.

It’s difficult to estimate how far-reaching the impact will be at this stage.

“We don’t know all the sanctions, the reaction from Russian travellers in terms of appetite to travel as a result of this situation, how long this war might go on, if Russia itself might react by restricting outbound tourism, and so on,” said Cendra.

Kenneth Atkinson, founder and senior board adviser of Grant Thornton Vietnam, believes restrictions on Russian travellers by Western countries are likely. “As well, the banking and currency restrictions will make foreign travel difficult. In addition, I would think people will not want to leave Russia because of the fear of not being able to return,” he said.

Asia, with the exception of countries such as Japan and Singapore, is not expected to impose sanctions against Russia. “I don’t see any wholesale moves by South-east Asia to restrict movements because of the sensitivities with China, and because Russia is an important air corridor,” opined Atkinson.

Disrupted flights
Geography is set to play a huge role in reshaping air routes. This may unwittingly impact the European travel market to Asia, which is starting to perk up following reopening announcements by one Asian country after another.

Because of its vastness, Russia’s airspace is the popular overflight for EU flights en route to Asia. However, most of Europe have shut their airspace to Russian airlines and Russia has reciprocated with its own bans, causing airlines to fly circuitous intercontinental routes, Bloomberg reported on February 27.

The latest moves “wall off Russian carriers such as Aeroflot from the shortest routes west, forcing them to head south as far as Turkey to go around. European carriers going in the other direction face delays and higher fuel expense as well, after Russia, a key pathway to Asia, began blocking access in response”, said the report.

Finnair, which has staked its strategy on short routes to Asia, said such a move would likely halt those flights.

Thus, Asian destinations that hope Russia could help fill the gap left by Chinese travellers, face uncertainty not just over the Russian market, but the European market, which may prefer to stay closer to home than fly longer and pay higher fares due to rising fuel costs. Oil prices have surged above US$100 a barrel for the first time in seven years.

Vietnam, which is fully reopening on March 15, is one such. In 2019, Vietnam received 650,000 Russian travellers. Thailand, which now enables Russians to arrive under its Test & Go plan, unlike when the scheme was first launched, is another. In 2019, 1.5 million Russians visited the Kingdom.

Victor Mogilev, group director of sales at Diethelm Travel, said: “Russian travellers, be they mass or luxury travellers, are known to be resilient. If there is a chance to travel, they will. Russian demand is always number one when destinations reopen — look at Maldives, Thailand and many others.

“I’d say continue to focus on the market, don’t mix politics with business, try to understand what the market needs/desires in the current situation, and find ways to offer solutions. This could be additional added value for families that might want to go out for few weeks longer, or tactical campaigns for people open to work remotely over the next few months.”

Angsana Laguna Phuket’s Zitek believes the crisis might even result in more extended stays, long stays or even “repatriation stays” depending on guest origin.

“Our market segments are diversified. Not all of our guests are from the Russian Federation itself. We also welcome many guests from Ukraine and the CIS, so the impact may be far-reaching, or it may be limited – too early to say,” said Zitek.

The Ukraine market travel cannot be compared with Russia in size but it is “usually quality tourists”, noted Diethelm’s Mogilev.

The biggest concern of Asian industry members is humanitarian in nature.

“My hope is the situation defaults to talking, not fighting and the consequence loss of life,” said Grant Thornton’s Atkinson.

Said Zitek: “The tourism industry will always recover. But not the loss of lives.”