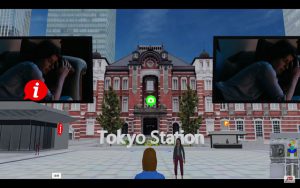 JTB Corporation teamed up with information media provider Fun Japan Communications and cloud service vendor Fixer to create Japan Virtual Platform, which will begin registration of users at the end of this month.

The initiative is designed to help revitalise Japan’s battered tourism industry as well as regions and local businesses specifically. Initially, JTB will target Japanese users, but its aim is to attract 1.25 million users in Asia and 10 million users worldwide by 2024.

Users will be able to explore various parts of Japan virtually using an avatar. So far, Hokkaido – an area renowned for seafood, dairy products and unspoiled nature – and Tokyo’s sleek Marunouchi district famous for Tokyo Station and the Imperial Palace Gardens have been created, with more areas slated for addition on a weekly basis. Users will also be able to interact with others and learn about the history and culture of Japan.

Local businesses and communities will be able to join the platform to promote e-commerce shopping, which JTB expects to be a popular activity among users.

Eijiro Yamakita, president and CEO of JTB, described the platform as a “new exchange mechanism that transcends the boundaries between real and virtual,” at a time when in-person exchanges continue to be “severely restricted” due to the pandemic.

Daisuke Fujii, president and CEO of Fun Japan Communications, said that the platform could “become a bridge between Japan and overseas” that helps to revive Japan’s tourism and local economy. He added that the project has the potential to “create a new trend in Japan and the world” based on “the connections between people”.