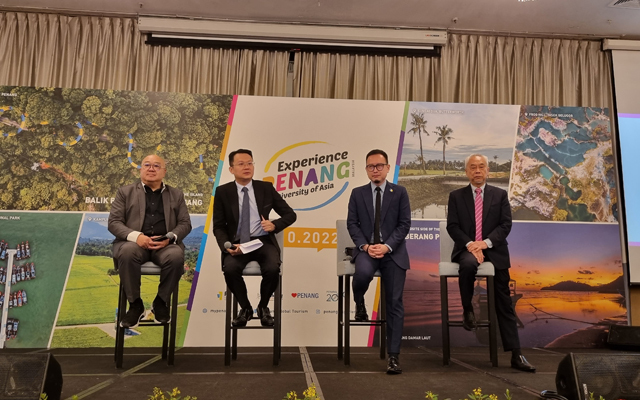 As Penang Global Tourism scales up destination marketing to spur travellers into action, it has chosen to spotlight lesser-known but accessible areas that are big on nature and exude laidback charms.

The Opposite Side of the Island campaign highlights Seberang Perai while The Other Side of the Island showcases Balik Pulau and Teluk Bahang. These were presented to the travel trade and media in Singapore on Tuesday, ahead of ITB Asia 2022.

These destinations promise experiences that are different from what Penang is typically known for.

Yeoh Soon Hin, head of Penang State Exco Office for Tourism and Creative Economy, said: “Most travellers to Penang tend to focus on George Town UNESCO World Heritage Site, drawn to the area’s historical architecture, artistic graffiti and street food. We initiated The Opposite Side of the Island and The Other Side of the Island to give urban visitors different discoveries.”

Visitors to Seberang Perai, Balik Pulau and Teluk Bahang can experience homestays with local residents, explore fruit farms particularly those specialising in prized durians, and take in a slower pace of life amid sounds and sights of nature.

He believes that these lesser-known destinations will “expand tourism options” in the state and lead to longer stays and higher spends.

Spotlighting these “hidden gems” will also raise interest in Penang, a destination already familiar to many regional travel trade partners and travellers.

Echoing Yeoh’s observations, Ooi Chok Yan, CEO of Penang Global Tourism, said: “We see travellers preferring more outdoor attractions post-lockdown, perhaps due to the belief that air flow is better and fresher. That is one of the reasons why we created the two new campaigns to promote Penang’s natural sceneries.”

“(The new campaigns have) increased the exposure of community tourism in these areas. Local businesses like food stalls, restaurants and handicraft (shops) have received significant visits from tourists, and (traffic) will gradually and definitely increase earnings for these residents,” Ooi told TTG Asia.

The tourism authorities have been guiding residents in Seberang Perai, Balik Pulau and Teluk Bahang on homestay operations and tourist reception. All homestays are certified by the tourism ministry, “so they meet international standards for hygiene and comfort”, shared Yeoh.

Expressing confidence in the tourism potential of the three destinations, Khoo Boo Lim, vice president of the Malaysian Association of Hotels, said “there are many interesting and creative developments” that would interest travellers.

“For example, in Balik Pulau, there are durian estates with cafes and that offer visitors a peek into the life of a durian farmer. If you were to visit during the durian season, you can even see ripe durians falling from the trees!” Khoo said.