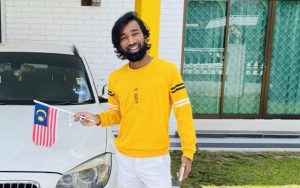 While career advisors typically urge a clear distinction between work and personal life, C Raaj Ganesh, CEO of Penangs.com, has found advantage in bringing both together – much to the delight of children and teenagers with special needs in his community.

Raaj uses his expertise in event management, and his network of contacts, to organise sporting events in Penang for young ones with special needs. He does this on top of running a full-time business centred on destination weddings in Penang, an online platform connecting travellers to verified tourist guides, and customised tours for travellers.

Growing up with an elder sister with Down Syndrome, he understands the importance of human interaction to improve the social skills and general well-being of those with special needs. At the same time, these interactions help others to understand the challenges faced by people with disabilities.

According to Raaj, his sporting events earn support from the local council in Penang. The council would sponsor the venue for activities, while Raaj would take care of the transportation and refreshments for the players.

His first project was in 2017, when he organised a nine-day event that involved Australian children and teenagers with special needs and their caregivers, the National Autism Society in Penang, and a government-funded secondary school in Penang for teenagers with special needs. The youngsters had fun interacting over activities such as bowling, cricket and sepak takraw. He also arranged a tour of Penang for the group of 46 attendees from Australia.

His work on such sporting events is driven by passion, and has no plans to turn them into a business. He told TTG Asia that he only hoped the events would provide “invaluable opportunities for interaction” between the Malaysian participants and their Australian peers.

With the Malaysian borders now opened to the world, Raaj has received interest from two non-profit organisations in Australia keen on bringing children with special needs to Penang next year for sports interaction with their Malaysian counterparts.

For now, Raaj is busy planning for the ASEAN Autism Awareness Walk on July 3. This is a two-kilometre walk that starts and ends at Youth Park Penang. The event welcomes everyone, not just those with autism.

Raaj hopes the event will generate greater empathy for those with disabilities, and provide good networking opportunities for people with special needs, their caregivers and the general population.

He has plans later this year for a badminton event in Penang, which will be open to those with special needs.