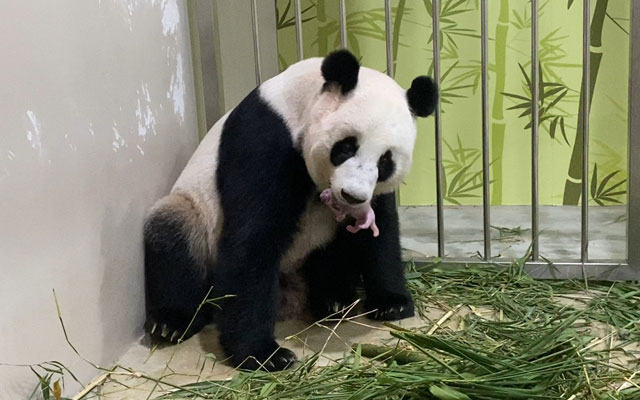 The gender of the cub, which weighs about 200g, is yet to be determined and will be announced later, according to a release by Wildlife Reserves Singapore (WRS), which manages the River Safari. Meanwhile, mom and baby are in an off-exhibit den to give them time to nurse and bond.

There was optimism that the pandas would naturally breed this year, after the pair had shown improvements in their mating techniques the year before.

To make the most of the once-a-year breeding season, CCRCGP experts advised WRS’ vets to perform artificial insemination before the end of the receptive period. The procedure was carried out by the in-house veterinary team at WRS’ Wildlife Healthcare and Research Centre, using frozen semen collected from Kai Kai before the mating season.

Caring for Kai Kai and Jia Jia in Singapore contributes to the conservation efforts of giant pandas which remain a threatened species, WRS said. It cited a recent study suggesting that giant pandas in the wild are more fragmented and isolated than they were 30 years ago, and that the species continues to face a high risk of extinction.