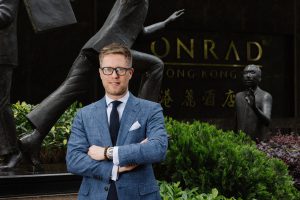 Previously in 2016, Jansen first joined the hotel as the hotel manager, before being recruited as opening general manager of Conrad Hangzhou two years later. His return this year will play an instrumental role in leading the hotel in adapting to the new normal and creating business opportunities.

Prior to joining Hilton in 2012, Jansen cut his teeth in management at the Rezidor Hotel Group (presently known as the Radisson Hotel Group), particularly in the business development and commercial sectors.