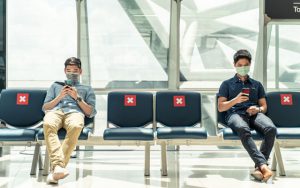 As travel slowly resumes, new research from Collinson has found that quarantine and testing remain a key concern for travellers in Asia.

Whilst generally the desire to travel is high, there’s a new underlying mental health issue that travelling may cause, manifesting itself in the stress associated with post-pandemic travel. Three quarters (73%) of travellers worldwide said they’ll be prioritising their mental wellbeing more when they travel now, than they did before Covid-19.

Two in three travellers in Japan (67%) expect travel in the next year to be more stressful than in the past, a concern echoed by 78% in Hong Kong and 81% in Singapore. As such, a large proportion (87%) of global travellers specifically said they wanted access to socially-distanced spaces in which to ‘de-stress’ and ‘relax away from the crowds’; with 89% of travellers in Singapore and 90% in China citing socially-distanced spaces to relax in as a key factor to their airport experience.

While there was already a concern among travellers about the impact journeys were having on their physical wellbeing, 81% said the pandemic had heightened these concerns. Physical wellbeing when travelling is a key priority for both Singaporeans (64%) and Hong Kongers (74%), with both above the global average of 60%.

“The importance of mental health on the journey is perhaps surprising but equally a welcome insight into what travellers are looking for as the travel recovery continues to gain ground with new testing and vaccination regimes”, explained David Evans, joint CEO at Collinson.

“This is a way for the travel industry to look at its offering to consumers, allowing travel brands to understand what consumers want and what the industry needs to act on to rebuild traveller confidence.”

While apprehensions surrounding mental wellbeing and stress are a top priority for global travellers, issues around quarantine rules remain a significant concern for passengers in Asia.

In light of these findings, testing has proven to be an essential factor in rebuilding global traveller confidence, with the vast majority (83%) of global passengers wanting there to be tests in arrivals at the airport, and nearly the same (82%) wanting tests on departure.

Since the beginning of the pandemic, Asia has spearheaded the drive for Covid-19 testing, attributing it to the region’s success in keeping cases largely under control. The importance of testing both pre-departure and on arrival is shared by travellers from China (90%) and Hong Kong (86%), with a further 86% of travellers from Singapore desiring testing in arrivals and 85% on departure.

Ultimately, travellers are looking for a seamless journey, with a third of travellers from China (31%) happy to pay for airport lounge access to allow for this and 45% of Hong Kong travellers specifically listing a quick and efficient journey, including a fast security queue, as key to ensuring this stress-free experience.