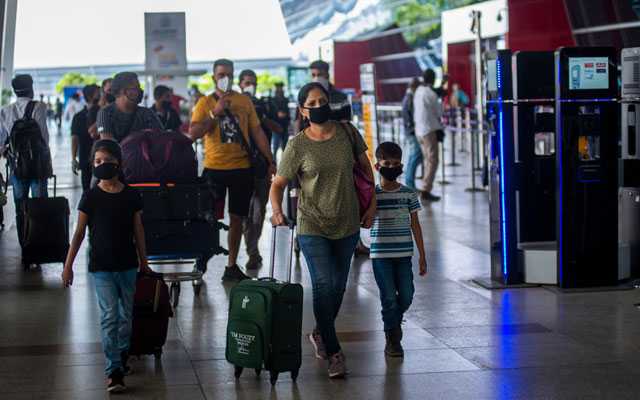 Domestic air travel in India has bounced back to 84 per cent of 2019 levels, while air bubble pacts have spurred the restoration of international seat capacity into the South Asian country, according to a ForwardKeys study.

Following the Indian government’s announcement that domestic flight operations could resume from May 25, 2020 through a calibrated approach, ForwardKeys’ air ticketing data reveals that domestic air travel has started, although the path to recovery has been bumpy.

International commercial passenger flights have been suspended for over a year now – since March 23, 2020 when the national lockdown restrictions were imposed.

From Q3 last year, India began setting up air bubble agreements with various countries. Since October 22, 2020, it started permitting foreigners to enter India on all visas, except for tourist visas. As of March, India has formed travel bubble arrangements with 27 countries.

Spurred by India’s incremental expansion of air bubbles over the past eight months, international air travel seat capacity into India has clawed back steadily, from 10 per cent of the pre-pandemic level in June 2020 (June 2020 vs June 2019) to 34 per cent in February 2021 (February 2021 vs February 2020).

Since June 2020, taking the lead from India’s air bubble developments and eyeing the leisure travel comeback in one of the biggest inbound tourism countries, airlines have been cautiously restoring international seat capacity into India and repositioning themselves to secure a head-start.

The source markets mix has shifted for Destination India due to the pandemic. “Leading the preliminary recovery is the US (76 per cent of 2019 levels), followed by Canada (47 per cent), the UK (17 per cent), Europe excluding the UK (11 per cent), Australia and New Zealand (two per cent),” said Jameson Wong, APAC director at ForwardKeys. Comparing April to September 2021 against the same six months in 2019, a significant shift in source markets is evident.

The UK, a traditional source market which used to constitute a sizeable 13 per cent, has shrunk by more than half to only six per cent. Europe, excluding the UK, has slid from 16 per cent to 12 per cent. Australia and New Zealand, combined, has dropped drastically from six per cent to one per cent.

Though not yet reflective of the true estimate of the leisure travel rebound as India still has leisure visas under suspension, such early signs of pandemic shifts in the traveller source markets to Destination India indicates the need for a change in planning and, exciting, new business opportunities, top-down. From government level to operator level.