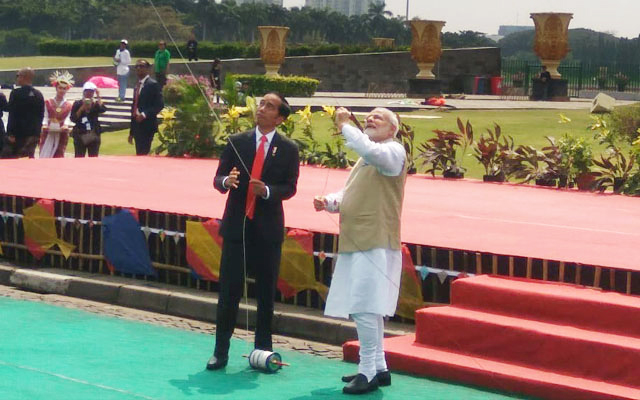 TTG Asia witnessed a rare playful side of Indonesian president Joko Widodo and Indian prime minister Narendra Modi during the Indian premier’s visit to Indonesia in conjunction with the celebration of the 70 years of diplomatic ties yesterday.

Both country leaders were flying kites carrying a logo depicting 70 years of bilateral relations during the opening of the Indonesia-India Kite Exhibition organised by Jakarta Kite Museum and the Ahmadabad Kite Museum at the National Museum in Jakarta.

The Indian prime minister was reported by the Times of India to have addressed an Indian diaspora at the Jakarta Convention Centre last night, saying: “Not only do the names of our nations rhyme but also there is a distinct rhythm in the India-Indonesia friendship.”

Modi’s visit is considered timely and could be said to be a prime “endorser” for Indonesia’s tourism as the country is focusing on boosting arrivals from India with a target of 30 per cent growth this year compared to last.